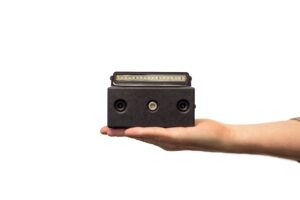 STEREO VISION IN THE PALM OF YOUR HAND

Titania is one of the highest resolution stereo vision systems available. Using the latest sensor technology from Sony, the system can produce high-resolution 3D models and 2D images. The small form factor and global shutters mean it can perform scans of areas through handheld operation or using a robotic arm. The built-in pattern illumination and attachable lighting mean the system may be used when lighting conditions are poor.

i3Dr’s Stereo Vision Toolkit is provided to allow users to re-calibrate the cameras, recalibrate the system, and view & save 3D pointclouds. We have used the popular computer vision library, Open CV, to make it easy to integrate Titania into your own custom applications. Combining the high specification camera technology with i3Dr’s advanced 3D stereo matching algorithms means the user can be confident they are producing the most detailed 3D scene from a small form-factor system. The stereo matching algorithms, originally developed for the Mars Rover missions, are the result of decades of development and are a good balance between speed and accuracy, making them perfect for real-time applications. In addition to producing 2D data/3D models, i3Dr’s powerful Stereo Vision Toolkit allows for machine vision and machine learning analysis on the data produced, enabling the system to be used when artificial intelligence is required.

Titania was originally developed for deployment in nuclear glovebox operations. The system is small enough to access all areas of a glovebox and is maneuverable around contents such as pipes and vessels. It may be posted through 6-inch ports or the larger posting ports. The system acquires 2D images and 3D models in near-real-time and using the latest machine learning algorithms has been used to perform object detection to alert users to sharp and/or hazardous objects. The output can be saved for post-process inspection or saved for regulatory purposes.

Stereo cameras can produce millions of 3D points per second, at a much lower cost than LIDAR and with no moving parts. Unlike time-of-flight cameras, stereo works seamlessly indoors and outdoors. Since 3D is reconstructed from images, point clouds automatically capture real-world intensity information.

Because Titania uses a global shutter and hardware-triggered frame synchronisation, it can capture subjects in motion. Combined with a 60 fps frame rate, Titania makes it easy to capture smooth 3D video in any conditions.

One of the well-known limitations of stereo imaging is poor performance in featureless or low texture scenes, for example, painted walls. Titania solves this by including an eye-safe pattern projector that provides texture in indoor scenes.

We provide demonstration software for image acquisition, stereo camera calibration, stereo matching and 3D reconstruction (pointcloud output). The software is open source and is available on our Github. 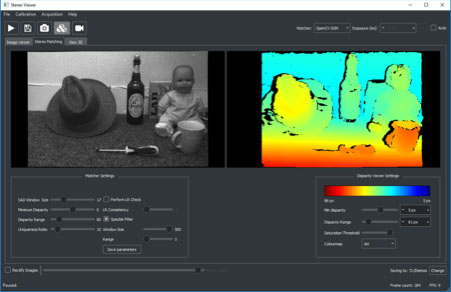 Whilst still in development stages, we have successfully demonstrated Titania may be combined with Raman spectrometers produced by i3Dr’s sister company, IS-Instruments. This allows for the production of both a 3D model of a scene and chemical analysis within the scene, all in one integrated package. We are in the process of integrating information from radiological sensors into 3D models.

All i3Dr cameras, including Titania, can stream 3D data into VR using the Stereo Vision Toolkit and a custom Unity package. This feature, combined with its size makes Titania ideal for no-hand-in-glovebox teleoperations.

Titiania weighs approximately 350 g. On request, we can customise the enclosure to suit your needs.